THE CATASTROPHIC FLOOD IN HYDRA 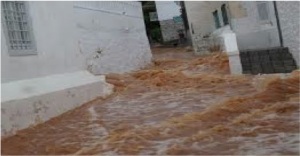 A natural disaster is a major adverse event resulting from natural processes of the Earth which can cause loss of life or property damage. In Hydra on 23 October 2015 a catastrophic flood was created by the rain which caused property damage and some injuries. 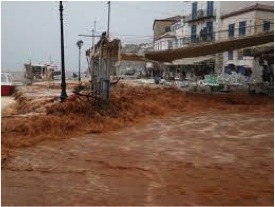 On the morning of 23 October 2015 at about 9 o’clock it started raining. It rained heavily for about 4 hours and because of the narrow streets of Hydra and jammed ways for the water to pass, at 12 o’clock the streets of Hydra became torrents to the sea. Because the torrents were very strong no one could pass them. This greatly affected  life in Hydra during that time (12:00-2:00 p.m.). For example the students were caged in the school for 2 hours, the residents who were outside were searching for a place to go to survive from the torrents which could carry them away to the sea. Finally the shop owners were trying to collect all the items (chairs, tables) outside of their shops because most of them ended up in the sea.

Many residents of Hydra were helpless while their properties were being destroyed and have been complaining about the damage to their houses, shops and boats.

HOUSES AND SHOPS: Some houses and two restaurants (Manna & Gatto Nero) suffered the most damage. 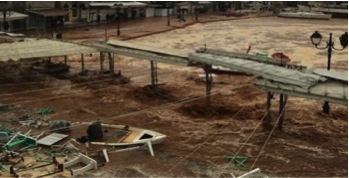 BOATS: Some boats which were “parked” by their owners high up in the village for repairs were carried away by the torrents and ended up in the port.

DAMAGE AT THE PORT

The damage at the port can be divided into two big categories according to the complaints of the residents and especially the mayor. As this damage is very important for the life in Hydra we can count it as the most important consequence of the flood.

East side of the port

DAMAGE AT THE EAST SIDE OF THE PORT

At the east side of the port, except the damage to the shops, large amounts of soil and dirt were piled up at the corner were the “sea taxis” are moored, blocking the area and destroying the bins and everything which was there.

DAMAGE AT THE MIDDLE OF  THE PORT

At the middle of the port a new “beach” has been created by the soil that ended up in the sea. This forced the boats to anchor further away which makes it difficult for the owners to reach their boats and puts their boats in danger.

EFFECTS ON THE WATER OF HYDRA

Hydra doesn’t have its own water. The only way to bring water is to bring it with big boats and store it in big water tanks. The torrents destroyed some parts of the water pipes and some rain water penetrated the water system and the results of that were:

Hydra’s port before the flood

Hydra’s port after the flood

HUMANS: Two residents of Hydra were injured but luckily they were taken to hospital and now they have fully recovered.

ANIMALS: Two horses died. Some stray animals might also have died, as the residents of Hydra said. Those deaths affect a lot those who have horses not only because they love their horses but also because they are expensive and they depend on them entirely for their work.

MEASURES THAT THE MUNICIPALITY & THE RESIDENTS OF HYDRA HAVE TAKEN:

The municipality of Hydra collected all the soil from Hydra by using big trucks and bulldozers.

not an easy job

Many residents of Hydra voluntarily helped  the people whose houses have been destroyed by the flood. People helped by cleaning up and the municipality by providing the trucks to carry destroyed furniture and soil.

MEASURES THAT THE MUNICIPALITY OF HYDRA & THE RESIDENTS MUST TAKE:

INTERVIEW WITH THE MAYOR 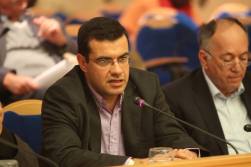 The mayor of Hydra George Koukoudakis

The mayor of Hydra Mr. George Koukoudakis was kind enough to grant me an interview:

IN YOUR OPINION WHAT ARE THE CAUSES OF THE FLOOD?

“The extremely heavy rain and the sheer amount of water which came down in such a short time.”

DID ANY PEOPLE COMPLAIN OR ASK FOR HELP?

“The residents of Hydra didn’t complain. We are doing everything we can to help these people to receive financial compensation which they are entitled to.”

WHAT DID THE MUNICIPALITY DO TO REPAIR THE DAMAGE?

WILL THE PEOPLE WHO WERE AFFECTED RECEIVE ANY FINANCIAL COMPENSATION?

“Yes. We have taken all the necessary initiatives to secure financial compensation for those who were seriously affected by this unprecedented calamity”

To sum up this flood was an unprecedented event that caused a lot of damage to Hydra. But with the assistance of the municipality and spirit of solidarity that all the residents of Hydra have shown we can repair the damage and make Hydra the beautiful island that we all know.